Diamonds are mined throughout the world, including major mines in Australia, Africa, Russia and Canada. Most people are unaware of the role diamonds play in bringing real benefits to people in the countries around the world where diamonds are sourced.  Diamonds are a major source of good in many African nations, employing and providing healthcare to thousands. 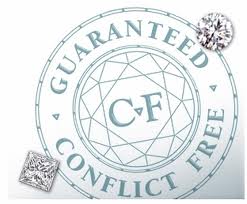 Conflict-free diamonds are those gems which were not obtained due to human rights abuses, child labor, violence, or environmental degradation. Although the U.N.'s Kimberly Process only covers diamonds under the control of legitimate and recognized governments, conflict-free goes one step further by rejecting diamonds from governments that trade in diamonds to bankroll their conflicts. 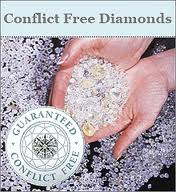 A blood diamond also called a conflict diamond, converted diamond, hot diamond, or war diamond, is a diamond mined in a war zone and sold to finance an insurgency, invading army's war efforts, or a warlord's activity. These terms are particularly used in the context of diamond trading to indicate the negative effects of their sale

Through the 1990s, most of the world's diamonds came from Africa, particularly regions undergoing civil unrest. Rebel armies in parts of Africa were exploiting alluvial diamond fields to fund their wars against established governments, putting people and the environment in the middle of their conflicts. Alluvial diamonds are found just inches to a few feet below the surface, making them easier to mine, but having an adverse impact on the environment. The people working these fields were often very young and subject to exploitation, with some losing their lives or permanently maimed as wars raged around them. Hence, the term blood diamonds to describe these types of gems.

In 2000, South African countries with a legitimate diamond trade began a campaign to track the origins of all rough diamonds, attempting to put a stop to blood diamond sales from known conflict areas. As an ethical customer it is our right to en quire about the origins of the diamonds and ensure that the diamond which adorns is not covered with innocent blood.

Diamond Grading Laboratory will give you the teaching about the conflict free diamonds to recognize and bring it to you.

Posted by International Gemological Laboratories And Institute at 23:59